Prysmian Australia has been awarded nbn’s “Supplier of the Year” for 2015.

Prysmian makes and supplies the optical ribbon integral to nbn’s national network and was recently awarded exclusive supply of all of nbn’s copper cable requirements.

“We are particularly proud of this award as the cables we make for nbn are made here in Australia, in the Sydney suburb of Dee Why. It’s a truly outstanding achievement recognising the superlative contribution of many, many people in Prysmian”, said Danny Doyle, Prysmian Commercial Manager Telecom – Australia and New Zealand.

“The nbn™ is Australia’s largest infrastructure project, and the companies involved in building it are the best in the world at what they do. It is from this field that Prysmian has won this award. We are simply delighted that our long term strategy to manufacture locally continues to be of significant value to our customers” said Mr. Doyle.

Prysmian’s first cable contract with nbn was awarded in 2011.

“It has been our responsiveness to the ramp-up in 2014, our continuous support in research and development and the close working connection between our Production and Commercial teams that have allowed us to react quickly to the increasing nbn rollout demands”, said Frederick Persson, Prysmian Australia & New Zealand CEO.

This award reiterates Prysmian’s position as the leading supplier of optical and copper cables to the telecom industry in Australia and New Zealand. 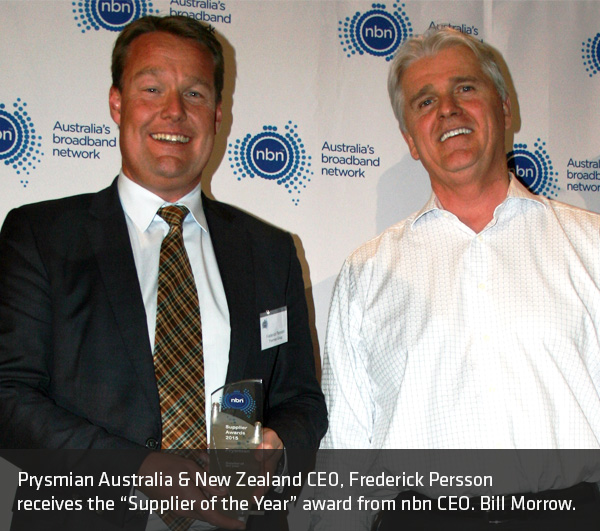