Mission complete: Solar Impulse 2, the special solar-powered plane landed in July in Abu Dhabi, successfully ending the first ever round-the-world flight using only the power of the sun.

An epic journey that began more than a year ago from Abu Dhabi has touched India, Myanmar, China, Japan, Hawaii and the United States. The Solar Impulse 2 is first sun-powered airplane to circle the globe without a drop of fuel. Bertrand Piccard who piloted the aircraft with André Borschberg, believes the flight represented “more than a success in aviation history. Solar Impulse made history in the field of energy.”

Not only was the Solar Impulse the first solar plane to accomplish an oceanic crossing, the plane:

Alain Jeanguillaume, Prysmian’s Director of Aerospace Business states, ‘we are proud to be part of this important project. Prysmian Group was a Specialised Partner, having supplied 150km of special aerospace cables to distribute power around the aircraft.’

André Borschberg also commented: “To build an airplane of the size of a 747 with the weight of a car, something which was considered impossible by the aviation industry, we had to develop the right mindset in order to push the limits of the technologies. With Partners who believed in the same vision we developed solutions to make our airplanes very energy efficient. All these technologies can be used today in other applications to make our world more energy efficient as well.” 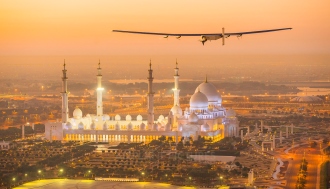