– A New Cable for A New Era of Network Access

FlexTube was developed by Prysmian Group in France nearly ten years ago.
It was designed to offer a compact fibre-optic cable solution to ease duct congestion in central Europe.

FlexTube is radically different in design and the first of its kind. Not only compact in size but far easier to handle and prepare. Stiff tubes were replaced by flexible micro-modules creating fibre density and handleability like never before. It wasn’t too long before France Telecom switched their entire cable range to FlexTube and the rest of the world began to take note.

As demand for the product grew, Prysmian’s capacity raced to catch up, expanding manufacturing sites and replicating the technology across two further facilities in Spain and Romania.

Since its introduction, over 40 countries have benefitted from the capabilities of FlexTube technology with broad adoption across Europe as well as in Africa and Latin America.

The product was first brought to Australia in late 2013. Demand for FlexTube increased rapidly, spurred by the growing demand for fibre connections within congested CBD areas. The remarkable fibre density and ease of handling proved attractive to installers and network owners alike.

It soon became apparent that Australia would require local manufacturing capability in order to service local customers; the European plants could not satisfy the demand and delivery timeframes required. In early 2015 the decision was made to install FlexTube production capability at Prysmian’s Dee Why plant in Sydney.

12 months later and after significant technological investment, commercial manufacture of FlexTube in Australia has commenced – European by design, 100% Australian made.

FlexTube – An Introduction into Australia

FlexTube is particularly popular in Australia with network owners who rent their duct space or companies that offer dark fibre services and look to install as many fibres as possible in a given infrastructure.

As a result, FlexTube is fast becoming the Australian carriers’ cable of choice for distribution and access networks and over the coming years Prysmian expects FlexTube to overtake conventional loose Tube cable demand for this segment of network.

Ease of Handling – Translates to Reduced Risk and Faster Deployment

Encapsulating fibres in soft, flexible micromodules rather than conventional stiff tubes not only makes the cable more compact but also quicker and easier to prepare. FlexTube is 40-50% quicker to terminate than regular Loose Tube cable. Fibre modules can be removed by hand and contain far less filling compound. Access is fast and easy and there is no risk of tubes kinking, causing signal attenuation or fibre breaks.

FlexTube in Australia – A Series of World Firsts

It wasn’t long before Australian customers pushed the limits of the technology by requesting higher and higher fibre counts, culminating in the development the world’s first 1728F FlexTube cable with record-breaking density of 4.16 fibres/mm².

The cable was first used by an Australian Telco as a one-shot link between two data centres in Sydney and was the first global deployment of a cable of this type and capacity.

The major benefit of this cable was the reduction in cost of installation per fibre. It is roughly the same cost to install a 1728F FlexTube cable as to install a traditional 624 fibre loose tube cable. Therefore, using a 1728 fibre count more than halves the cost per installed fibre, creating a significant competitive advantage.

It is not just terrestrial cabling where FlexTube has made an impact but underwater cabling as well.
When another Telco came to Prysmian requesting the highest capacity underwater cable possible, FlexTube seemed the obvious choice. Given the huge expense and complexity of underwater cable deployment, coupled with rising fibre demand, the cable needed to be small and lightweight for easy installation but also offer the highest possible fibre capacity. The innovative approach utilized a 720 fibre FlexTube core in the same form factor as a conventional 312 fibre solution, lowering the total cost of ownership by providing over double the fibre capacity per cable for the same installation costs.

Fibre Innovation at Its Core

2016 sees the release of Prysmian’s brand new range of optical fibre joints for outside plant connectivity. The joints have been designed with a FlexTube focus but are also compatible with conventional loose tube cable. The central product, Prysmian LMJ, is a modular joint with an expandable capacity from 384 fibre splices to an impressive 2688. Mechanical glands do away with the risks associated with heat shrink seals and the joint’s modularity enables users to defer costs and expand the joint as and when required.

The End of Loose Tube – Maybe Not

So does FlexTube’s revolutionary design spell the end for the conventional Loose Tube cable?
“Not so fast” says Kara Lo, head of Telecom Cable Design.
Lately Prysmian has also enhanced its loose tube cable offering, shrinking the product down to levels below the FlexTube equivalent for certain fibre counts.

“For the first time we are now offering 144F cables with a diameter below 8mm. The cable has a central GRP and is extremely versatile in terms of installation technique – able to be blown, hauled or pushed, depending on the environment. FlexTube will always reign supreme at higher fibre counts but below 144 fibres Mini Loose Tube is a competitive offering with some high-value features.”

“Further developments are also in the pipeline including an even higher density design utilising 200µm fibre, so don’t write-off Loose Tube just yet.”

Also, Prysmian’s conventional loose tube cable – Sm@rtcore – continues to be an industry favourite. Resilient yet versatile and available in fibre counts from 12 to 624, it has maintained popularity over the years. Installers enjoy the familiar design and its ease of availability. Sm@rtcore is durable and dependable and is likely to continue to feature heavily in optical networks for some years to come.

As network operators continue to demand the most from their optical networks, Prysmian will look to further push the boundaries of cable technology and manufacturing. Answering the need for higher capacity links, whilst reducing the risks and costs associated with deployment. “As the demand for bandwidth grows, it is likely we will see even higher capacity cables in the future”, says Sam Finocchiaro, Director of Engineering. “The stage is set for FlexTube, it answers a lot of the needs of our local customers but it won’t stop there. Innovation is at the heart of everything we do and as the industry evolves we will continue to look at new ways to support our customers.” 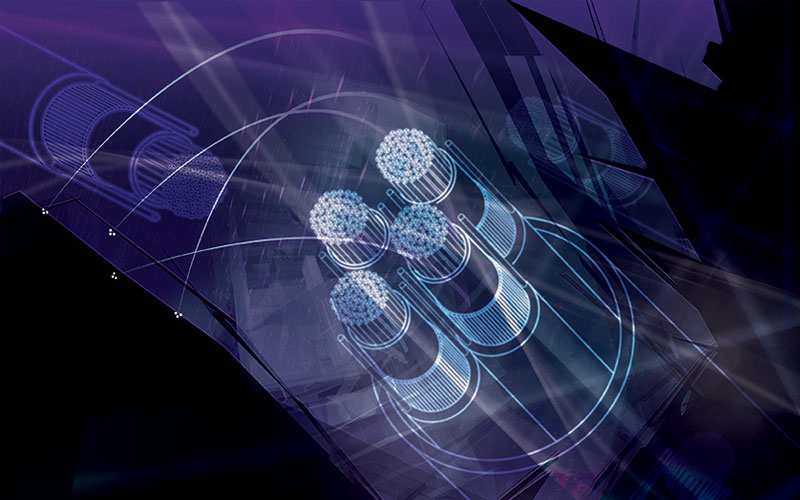